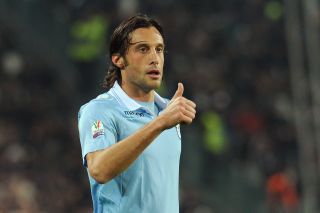 Mauri was hoping to be involved in Lazio's Supercoppa Italiana final against Juventus on Sunday, but will not be able to feature as the court requested further evidence and investigation before reaching a conclusion.

The Lazio midfielder appealed a six-month ban handed to him for failing to report to authorities knowledge of a potential fix.

Prosecutor Stefano Palazzi also lodged an appeal to have an original punishment of over four years reinstated after accusing Mauri of actively partaking in match-fixing.

The 33-year-old's case in the Calcioscommesse trial stems from two Lazio league fixtures against Genoa and Lecce in May 2011.

He received the six-month punishment in July when the court concluded Mauri had knowledge of match-fixing but did not report the offence.

Palazzi's appeal to convict Massimiliano Benassi, Omar Milanetto, Antonio Rosati and Alessandro Zamperini, who were all cleared in the original trial, proved unsuccessful with the court upholding the initial ruling.

No official date has been set for a ruling on Mauri's case.