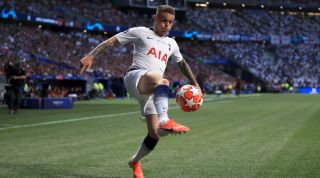 The England international joined Atletico Madrid for £22 million this summer but said last week that he “didn’t really get an answer” when he asked Spurs chairman Daniel Levy about his future prior to the move.

Trippier went on to say that “Tottenham got rid of me at the wrong time”, but attempted to explain his comments to Pochettino after believing that his words had been misinterpreted.

However, the Argentine revealed that he didn’t receive the message due to a change of number.

"I didn't see [Trippier's comments], but I heard about it,” he told Sky Sports.

“I can explain how I feel. We had a conversation where he explained he was going to move to Atletico Madrid - nothing more.

"Yesterday (Wednesday) when Harry Kane arrived back he said to me, 'Did you get Kieran's text?' I said 'no' because I changed my number. Maybe because he doesn't have the new number.

"Because he believes his words were twisted - I don't know nothing more. Kieran translated this message to me through Harry Kane. He wanted to tell me. But I've got no problem with Kieran.

"In football decisions happen, and players move from one club to another. What happened, happened and we need to move on and he needs to think of Atletico Madrid and be happy there.

"There's no point to talk about if something happened or didn't happen. The reality is one reality, but who is right in all this process? There's no point in talking. But I keep very good memories from him.

"After the summer he came to see me, he asked me for a meeting and said, 'Gaffer, I think I have a good possibility and for different reasons I would like to accept the offer from Atletico Madrid'."

Pochettino insisted that there was no suggestion from his part that Trippier was unwanted at Spurs.

He said: “It wasn't a conversation - you want me? Or you don't want me? It was so clear.

"He didn't ask me nothing - only communicated whether the club was going to accept the offer. Nothing more."