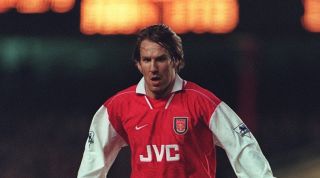 Tottenham manager Mauricio Pochettino has joked that he would love to have played against Paul Merson so that he could kick him.

The former England international made 327 league appearances for Arsenal between 1985 and 1997.

He now works as a pundit for Sky Sports and claimed this week that Spurs are "in disarray" ahead of Sunday's north London derby.

And when asked which Arsenal player past or present he would have relished coming up against, Pochettino picked out the ex-midfielder.

"To play against? Yes, it would be Paul Merson - to kick [him]," the Argentinian said on Friday.

Spurs will be looking to bounce back from last weekend's defeat by Newcastle when they travel to the Emirates Stadium on Sunday.