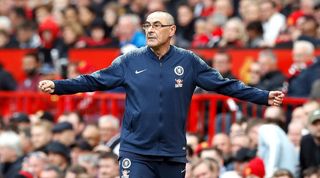 The Italian has come under frequent pressure to keep his job during his first year in English football, despite leading the Blues to a third-place finish in the Premier League.

The Telegraph reports that the Stamford Bridge hierarchy haven’t agreed on who will be in charge next season ahead of their European final against Arsenal on May 29.

Sarri’s chances of keeping his job would be increased by winning the trophy, despite reports in Italy suggesting the result of the final in Baku is irrelevant, although the club haven’t given the Italian any assurances.

Roma have been linked with a move for the former Napoli coach as they look for a permanent successor to caretaker boss Claudio Ranieri, but the 60-year-old would prefer to stay in London.

Chelsea’s climb to third place in the table has helped his cause, earning the club Champions League football for next season, but the manager’s patchy relationship with fans is a concern.

The report adds that owner Roman Abramovich will not have been happy with Sarri’s criticism of the timing of a charity match being played in the USA before the final.

Chelsea’s potential transfer ban could also play a part, as it is understood that the club would be less likely to sack the Italian if they were unable to bring in new players over the summer.

The Blues have been prevented from signing players for the next two windows by FIFA, but have taken their appeal against the punishment to the Court of Arbitration for Sport.