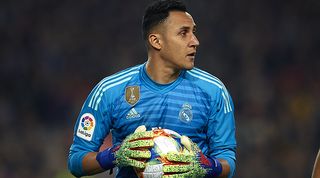 Dembele arrived at the Camp Nou as a replacement for Neymar in the summer of 2017 – but he's still yet to prove he’s worth his nine-figure fee. The Frenchman has been dogged with injuries throughout his Barcelona career, but has also suffered from inconsistent form even when fully fit. Discipline hasn't been great, either: he's turned up late more than once, and earlier in the season it was reported that gaming was becoming a serious problem for him.

With just 715 minutes of action in all competitions since February – the equivalent of less than nine full games – a change of scene from Spain may be best for the talented winger who is still just 22 – even if only on loan for now. The possible arrival of Antoine Griezmann only increases the likelihood of a transfer.

Would suit: Chelsea, if they can beat their transfer ban this summer.

After helping Real Madrid win three consecutive Champions League titles, Navas was harshly dropped to the bench in favour of new summer signing Thibaut Courtois – a longstanding desire of president Florentino Perez, if you believe Spanish reports. Courtois was anything but impressive as Madrid endured a frustrating season, however, leading to the sacking of Julen Lopetegui in October and Santiago Solari in March.

Zinedine Zidane returned and briefly restored Navas to his starting XI – but despite the Costa Rican starting six of the next seven league games, he was once again dropped to the bench for Courtois. Navas is still one of the best goalkeepers in the world but may not be in Madrid’s plans for next season as they look to free up funds for some high-profile purchases.

Would suit: Manchester United if they're looking for an attainable David de Gea replacement.

Martinez may have been considered one of the world's best midfielders at one point, but he has struggled for game time of late. Having been dropped last season by manager Jupp Heynckes, reportedly for poor performances and attitude, the Spaniard has found minutes limited even under current manager Niko Kovac.

With the likes of Joshua Kimmich, Thiago Alcantara and Leon Goretzka above him in the pecking order, Martinez started the season on the bench for seven of Bayern’s first 15 league games. In total, he's only begun 16 league matches in 2018/19. Athletic Bilbao have been linked with re-signing their academy product again, but the Spain international would certainly be a top signing for any of the Premier League’s elite.

Would suit: Tottenham for an experienced – if ageing and potentially expensive – Toby Alderweireld replacement; Manchester United simply for some quality at centre-back or in central midfield.

Despite being regarded as one of the most promising defenders in world football, Rugani has struggled for game time at Juventus. The 24-year-old only featured in three league games up to the end of December, and in total he’s started just 14 at the time of writing.

Of course, Rugani has had to compete with Giorgio Chiellini and Leonardo Bonucci, and with the duo ageing you can see why he recently signed a new contract.

However, he seemingly still hasn't done enough to convince the club's hierarchy. After Rugani was at fault for both of Ajax’s goals in Juve's Champions League exit, the Bianconeri were soon linked with a move for Roma’s Kostas Manolas. If game time continues to be a problem, he might be better off with his old manager Maurizio Sarri.

Would suit: What transfer ban?

Following World Cup glory last summer, Umtiti has endured a season to forget. Poor form and niggling knee injuries have seen him fall out of favour with manager Ernesto Valverde, and the centre-back has only started 13 league games for the Blaugrana this season. The 25-year-old didn’t feature for a single minute in the knockout stages of Barcelona’s Champions League campaign either.

With compatriot Clement Lenglet taking advantage to stake a claim in the starting XI alongside Gerard Pique, as well as the rumoured arrival of Ajax captain Matthijs de Ligt in the summer, a transfer seems imminent.

Would suit: Arsenal probably can't afford him, which leaves Manchester United and Manchester City to do battle for a promising player with room to grow.

Costa might be injured now, but he found game time hard to come by even before that thanks to the arrival of Cristiano Ronaldo last summer. Of the 18 squads he made for the Bianconeri, the Brazilian only started seven times. Other than one Champions League group stage appearance, he hasn’t completed 90 minutes in a single game either.

He did have a four-game suspension early on in the season after spitting at an opponent, but even still: Costa averaged nearly 62 minutes per game last season, and has only 39 this time around. There's talk of Juventus selling the former Bayern Munich man to fund the transfer of Federico Chiesa, and most Premier League clubs would be boosted by the 28-year-old’s arrival.

Would suit: Could Jurgen Klopp use the Brazilian to bolster the competition among his front line at Liverpool? Tottenham and Arsenal look best suited on paper, but money could be an issue.