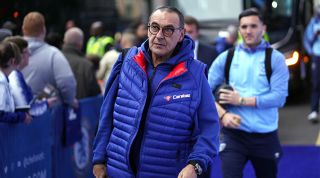 It looks like the era of Sarriball is over at Chelsea, with Juventus reportedly reaching an agreement with the Italian to make him their new manager.

After the resignation of Massimiliano Allegri, a number of names were linked with the job, including Pep Guardiola and Mauricio Pochettino.

However, Tancredi Palmeri reports for SNAI that Juventus have offered a contract to Sarri, and he will sign as soon as he has worked out his exit with Chelsea, although no announcement is expected until after the Europa League final.

Despite a blistering start to the season, Chelsea stuttered under Sarri, and were way off the pace in terms of the title.

During the course of the season he was criticised for playing N'Golo Kante out of position, and not giving enough opportunities to Callum Hudson-Odoi.

He also openly questioned the mentality of his players, and in one of the most bizarre moments of the season, was seething when goalkeeper Kepa Arrizabalaga refused to be substituted in the Carabao Cup final.

That said, his stock remains high in Italy, and with rumours that Chelsea may be courting former player and current Derby County manager Frank Lampard to be their new boss, maybe this is a move that makes sense all round.

Why Chelsea fans have hated Sarriball this season