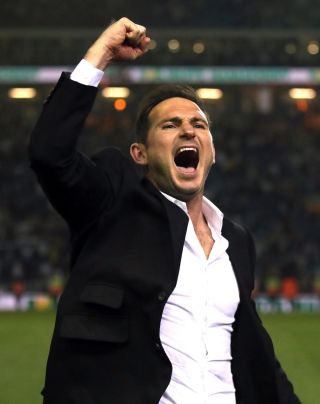 Chelsea’s record goalscorer has been linked with a return to Stamford Bridge as manager if they part company with Maurizio Sarri after Wednesday’s Europa League final against Arsenal.

Lampard has guided the Rams to within one win of the Premier League in his first season as a manager and they face Aston Villa at Wembley on Monday.

Sarri will also discuss his future with the Chelsea hierarchy “to know if they are happy with me” after their final in Baku.

Lampard, who won three league titles at Stamford Bridge, reiterated he was happy at Derby but will discuss the club’s direction and his own future after Wembley.

He said: “I’ve got two years left on my contract here and I see no further forward than Monday.

“I will sit down with Mel after the game, which was planned before all this talk anyway, to see firstly what the result was on Monday because that’s going to define how we chat.

“And also they have a manager in Sarri who is trying to get them to win that final.

“It’s been a bit of an obvious link all season. If I say it’s maybe because of where we’re at – in the final – and we’re being talked about and I get linked because of my 13 years at the club, then I understand the link.

Derby won 4-2 on aggregate in their semi-final against Leeds, the team caught spying on a Rams training session earlier in the season.

Lampard and the squad celebrated wildly on the pitch and in the changing room, with the manager paying a £2,800 bar bill afterwards.

But the 40-year-old insisted his players have refocused.

“I don’t remember feeling so much determinations to win a game, that’s why it spilled over at the end,” he said.

“We definitely had to come back down to earth from that. We are calm and ready to play because beating Leeds in the semi-final might have felt great but this one is the one which really means something.”