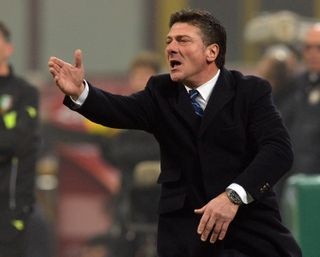 The Milan outfit have lost both of their games since returning from the mid-season break, with their 1-0 reverse at Lazio in Serie A being followed by a Coppa Italia defeat at Udinese by the same scoreline.

A run of just one win in their last six league games has left Inter sixth in the Italian top flight, eight points adrift of Mazzarri's former club Napoli in the third and final UEFA Champions League qualification spot.

They return to action on Monday, when Eugenio Corini's Chievo - who are 16th, just two points clear of the relegation zone - visit San Siro.

And Mazzarri has urged the Inter faithful to play their part in kick-starting the team's new year.

"We want to get back on track tomorrow, that's my message to the fans.

"I hope there's a nice atmosphere in the stadium tomorrow - that will help us a bit.

"We've lost three games - against Roma, Napoli and Lazio. We've had 14 results, but too many draws.

"It's crucial we clear this hurdle tomorrow."

Mazzarri was also coy on his plans for the January transfer window, which represents the club's first opportunity to strengthen their squad under the leadership of new president Erick Thohir.

"On my instructions, the club is trying (to sign new players) ... as has also been said by the president," he added.

"But let's talk about the game - I'm interested in this."