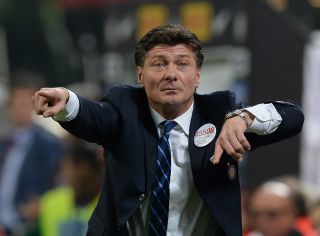 Inter raced into a 2-0 lead on Saturday as haphazard defending of corners by Verona led to a Vangelis Moras own-goal and a scrambled Rodrigo Palacio effort.

Raphael Martinho pulled a goal back for the visitors before goals either side of half-time from Esteban Cambiasso and Rolando – the latter from another set-piece – rendered Romulo's fine strike a consolation.

Nevertheless, Mazzarri lambasted his charges for playing to the San Siro crowd after their flying start.

"We started really very well and once we got to 2-0 up, we started to show off and play more for the crowd than to get goals," he told Sky Italia. "We shouldn't do that."

"We lost concentration and conceded a goal, so we could've done ourselves even more damage and in future we'll pay for that attitude.

"Just look at Juventus, who were winning 2-0 at Fiorentina until the last half-hour and then lost 4-2. You can never assume you've won.

"This is a team with many young players. As long as everyone was concentrated and did their part, we played a fantastic game. As soon as we went deeper and took our foot off the gas, Verona put us under pressure.

"I told the players that until we learn these lessons, we cannot think of troubling the top teams."

In a bizarre end to proceedings, Moras and Inter substitute Ishak Belfodil were sent off after the full-time whistle for an on-pitch scuffle.

Mazzarri offered sympathy, but reminded his young charge that he must learn quickly.

"He is a champion," he added. "Belfodil alternates great moves with errors, so he is still young and has to learn.

"With the red card, it's again a lack of maturity. The game was over, he shouldn't react to provocation and should also show respect for opponents who are upset after losing.

"A mature player would realise the situation, keep his cool and get out of there. I don't think it was necessary to take action at that stage."