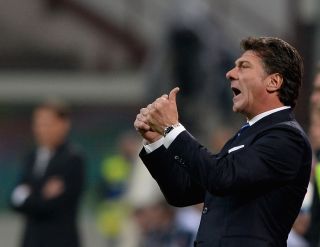 "It doesn't matter where we are now, what matters is how the team grows throughout the season and how we end it," Mazzarri said.

"We must go beyond the results and look at how we've played in recent games.

"We're on the right path. Inter will be competitive again, I'm sure of that.

"The club's history and tradition dictate that.

"We've started the season much better than we were expected to, but we mustn't underestimate the defensive side of things.

"We must start paying attention to all the details again in that side of the game.

"We can't underestimate anyone or anything, and we have to try and maintain our balance on the break.

"The players deserve praise for their character, togetherness and organisation."

New Inter owner Erick Thohir has met with Mazzarri, the coach confirmed, but he did not offer more information about their discussions.

"I've been in contact with Thohir but I'd rather keep club matters to myself," Mazzarri said of the discussions with the majority owner of Inter.

"I'm happy that Thohir said what he did about me and the team.

"We'll go a long way regardless of how we do in the short term."