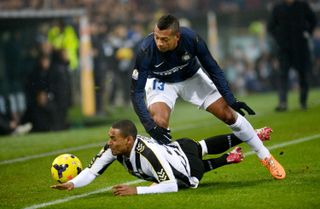 The Colombia international has been heavily linked with a move to Stamford Bridge after helping Inter to sixth in the Serie A this season.

While Mazzarri is keen for the 27-year-old former Porto man to remain at San Siro, he was unable to promise this would be the case.

"Clearly I'd like for him to stay, but if his sale is being considered then that too explains the club's situation," he said after Inter's Coppa Italia exit against Udinese on Thursday.

"This year there are eight players going to the end of their contracts.

"I can't give guarantees to the fans. I arrived in June when Erick Thohir wasn't the owner yet and I was told to get the best out of this squad. I achieved something at Napoli, which is why this team was handed to me."