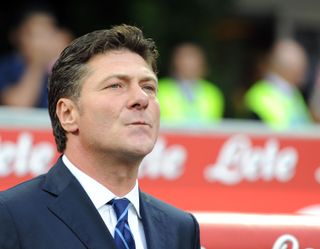 Inter have failed to build on an encouraging start to the season, winning just one of their last five Serie A matches.

They still sit fourth in the table but are preparing to face a Udinese side who have lost just one league fixture at home this year.

That loss came last week to table-toppers Roma and wary of a response, Mazzarri predicted a tough match for his team.

He said on Saturday: "Udinese bring in lots of new players every year and yet they retain their identity.

"They have a great coach (Francesco Guidolin), who does an excellent job both with youngsters and more experienced campaigners, and his teams are hard to beat."

Inter threw away a lead on Tuesday as they were held to a 1-1 draw at Atalanta, and Mazzarri has urged caution amongst his players if they hit the front again.

"When we take the lead in games we must expect a reaction from the opposition," he said.

"We can't get distracted or lose our concentration."

The Inter boss also confirmed that goalkeeper Samir Handanovic (hip) and forward Mauro Icardi (groin) will be given until the last minute to prove their fitness, but the the match will come too soon for defender Hugo Campagnaro (muscle strain) to be involved.