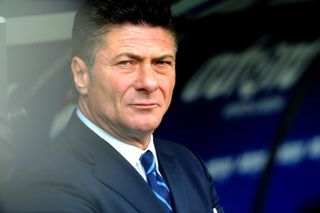 Mazzarri has led the club to fifth place in Serie A in his first campaign in charge and Inter look well set for a berth in next term's UEFA Europa League with three matches remaining.

It has been an eventful season at San Siro, with Indonesian businessman Erick Thohir completing the takeover of the club from the Moratti family in October.

Despite the upheaval, Fassone claims the Inter board are pleased with the progress being made and was firm in his response when asked if Mazzarri will be in charge next season.

"Definitely," he told Rai. "The president has said as much himself.

"I'm glad you asked me that question so that we can remove any doubt about it.

"Are we happy with Mazzarri? We're very happy with our coach and the work he's done, considering the particular circumstances this year.

"We've experienced a unique situation for a football club: a family like the Morattis selling a part of the club in the middle of a season, following a number of years that have seen a succession of coaches and a sixth and a ninth place finish, and the fifth place we find ourselves in now."