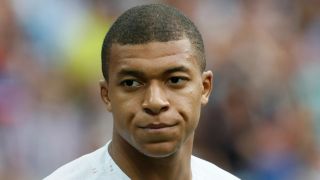 Mbappe has been one of the stars of the tournament, a contender for the Golden Ball, with a brilliant brace against Argentina announcing the 19-year-old on the world stage.

The 19-year-old became the first teenager since Pele in 1958 to score more than once in a World Cup game, earning congratulations from the Brazil icon.

Real Madrid denied reports they have reached an agreement with Paris Saint-Germain for Mbappe, describing the claims as "completely false", but the forward promises to be in demand.

And ahead of France's semi-final against Belgium on Tuesday, Blanc picked out Mbappe as one of the key players for Didier Deschamps' side, who he compared to Les Bleus' last World Cup champions in 1998.

"My opinion on this boy has been very clear for 10 months: he is a phenomenon!" Blanc said to Le Parisien. "That does not mean that he will make us win all the time.

"He is a boy who scares the opponent. The whole team benefits from the fear that others have of this player. That benefits him and his team-mates too. It will be good for the team.

"[Belgium] also have a phenomenon with Eden Hazard, often the national teams are led by a player above the rest.

"The team of France is led by two players with enormous potential. [Antoine] Griezmann is also very good, [Paul] Pogba can be very good and they are surrounded by good players and they are like us in 1998, if we want to make a comparison."

France will come up against one of their former stars in Thierry Henry, who is part of Roberto Martinez's Belgium coaching staff.

"Yes, I find it weird. It's a bit special. This surprises me. But it's like that," Blanc said of Henry.

"Everyone I meet in the street tells me that we will win the World Cup. Two or three months ago, few thought it.

"France demonstrated they are capable of it. I wish for it, but the hard part starts now. They showed a lot of serenity and maturity. They were superior to Argentina and Uruguay.

"We must continue like this in the face of informed and forewarned opponents. It's getting more complicated, but it needs to keep going."