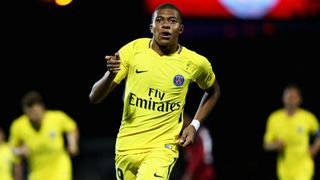 Kylian Mbappe has become the Champions League's highest-scoring teenager after netting for the eighth time in the competition on Wednesday.

The France international, still just 18, burst onto the European scene with six goals in last season's competition for Monaco as the Ligue 1 champions reached the semi-finals.

Mbappe moved on to Paris Saint-Germain in the recent transfer window, but he has continued his fine form, netting away at Celtic and then again on the road against Anderlecht after just three minutes.

That strike - his eighth in the Champions League - sees the forward surpass Patrick Kluivert's seven goals to take the outright record.

8 - Kylian Mbappe has scored more Champions League goals as a teenager than any other player. Talent. October 18, 2017