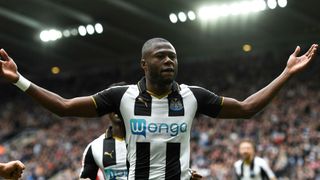 Chancel Mbemba hopes his move to Porto will provide him with more first-team opportunities after struggling to break into Rafael Benitez's plans at Newcastle United.

Mbemba signed a four-year contract with the Primeira Liga champions on Monday after two seasons in the shadows at St James' Park.

Having arrived in England from Anderlecht in 2015, the 23-year-old played 33 times in the Premier League as Newcastle were relegated, but made only 21 league appearances in 2016-17 and 2017-18 combined.

He hopes the switch to Portugal will increase his time on the pitch, and is desperate to get started with Sergio Conceicao's men.

"I came here to win titles, but first and foremost I will continue to work to win," he said.

"I'm going to work to earn my place, I want to give everything I have to show what I can do for everyone.

Mbemba's first outing for Porto could come against Newcastle with the two clubs set to meet in a friendly at the Estadio do Dragao on Saturday.