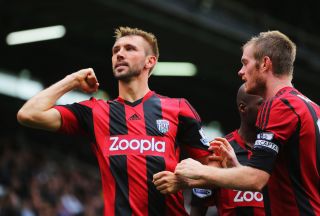 The 28-year-old joined the Midlands side on loan from Marseille days before the transfer window closed and has already made quite an impact, netting twice in four Premier League starts.

His fine individual form has helped inspire an upturn in the team's performances and West Brom are unbeaten in four league matches after starting the new campaign in shaky fashion.

McAuley, who has been with the club since 2011, is thrilled with how the Frenchman has settled in and feels his parent club Marseille are missing out.

"He (Amalfitano) is some player," McAuley told the club's official website. "I don't know who plays on the right of midfield for Marseille but he must be decent.

"He mixes it up and he does a great job for us without the ball as well, which some people might not see but we certainly do as players."

The 33-year-old was also full of praise for midfielder Claudio Yacob, who opened his account for the season in a morale-boosting 1-1 draw with table-toppers Arsenal last Sunday.

"He is our defensive midfield lynchpin," added the centre-half. "He doesn't get forward much but in training he scores goals and he's actually a really good header of a ball, which he showed with his finish on Sunday.

"I would never say he wasn't in form but he certainly has been breaking a lot of things up for us in the last two games and the goal against Arsenal will be in forefront of people’s thoughts."