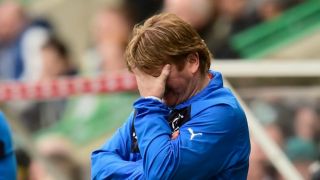 Rangers manager Stuart McCall conceded Motherwell will have to "throw away" their promotion-relegation play-off if the Glasgow-based club are to return to the Scottish Premiership.

With three away goals in their account, Motherwell are widely expected to extend Rangers' exile from the first division to four seasons on Sunday, and although McCall is well aware of his side's plight, he has not given up yet.

McCall said "if we are honest Motherwell can only throw it away now" but added that there were some positives about Rangers' defeat at home.

"I watched the first 30 minutes this morning and we had 70 per cent of the possession and were in control of the game and had a couple of chances," he said on Friday.

"But we couldn't get the first goal and their goal gave them a huge lift in confidence and they went on and no one could have envisaged that performance.

"We were disappointed in a lot of aspects of our game, possession wise, but we still showed the passion to stick in there and get a goal late on and maybe could have nicked another one."

"It's not going to be easy," Baraclough said after the first leg.

"No-one in our dressing room is kidding themselves, none of them are celebrating tonight. All the cliches are true - it's just half-time."