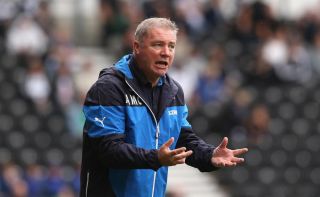 While the 52-year-old former striker never claimed it was the only reason he tendered his resignation last week, McCoist indicated Rangers' decisions to move on the likes of his secretary Laura Tarbet and former director John Greig did not sit well with him.

McCoist's future remains unclear, as his contract requires him to complete 12 months after resigning, although there is understood to be interest from the club's owners to move him on.

Asked if Rangers were losing their soul, McCoist told The Scotsman: "Well, it'd be wrong of me to say that, but we definitely are now missing people that have meant so much to Rangers over the years."

But McCoist added: "It's sad we're losing people that are synonymous with and have an identity with the club."

McCoist seemed particularly affected by the departure from Rangers of Tarbet, who had served as manager's secretary since 1971.

"The first manager she worked for was Willie Waddell, so that woman, in my opinion, deserves to have her name on the board going up the stairs at Ibrox," he said.

"She should be in the hall of fame. That's what I think.

"It's natural when you lose people like that, it affects you and saddens you.

McCoist still aims to help Rangers back into the Scottish Premiership before he leaves the club.

Rangers defeated Livingston 2-0 in the Scottish Championship on Saturday to remain second, nine points behind leaders Hearts, who hold the only automatic promotion spot.