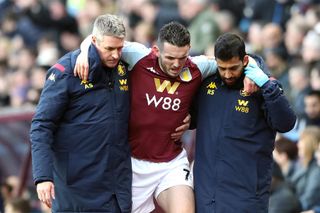 Aston Villa midfielder John McGinn has failed in his bid to make the squad for Sunday’s Carabao Cup final against Manchester City at Wembley.

McGinn fractured his ankle just before Christmas and had hoped to be available for the game but, despite stringent efforts to get fit, will be forced to watch from the sidelines.

Striker Keinan Davis returned to training on Monday from his latest hamstring injury and could be available. Striker Wesley (knee), and goalkeepers Tom Heaton (knee) and Jed Steer (calf) are all long term absentees.

The French centre-back, who has endured an injury-ravaged season, faces up to another month out with a hamstring problem.

Winger Leroy Sane is City’s only other major absentee but the German, out since August with knee ligament damage, is due to step up his comeback with a run-out for the Under-23s. Number two goalkeeper Claudio Bravo is set to play.