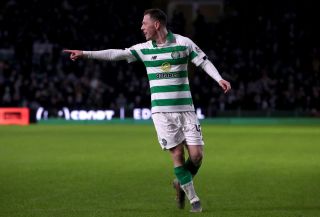 Callum McGregor is embracing a relentless fixture list as Celtic returned from Europe to quickly prepare for Kilmarnock on Sunday.

The Hoops are in the box seat in their Europa League last-32 tie against FC Copenhagen after a 1-1 draw at the Parken stadium on Thursday night.

Neil Lennon’s side are back into Ladbrokes Premiership business against Killie at Parkhead in what will be their 49th fixture of a season which started in July and where they will look to at least maintain their 10-point lead over Rangers at the top of the table, having played a game more.

Scotland midfielder McGregor who, with international duty has played 51 matches this season, admits the games are coming “thick and fast again” but would not have it any other way.

He said: “The games seem to be coming round all the time but that’s what you want when you are playing well and are in a good run of form.

“You just want the next one to keep coming and obviously again, it will be a tough game.

“Killie are always organised when they come to Celtic Park and hard to break down so the onus is on us to do that and get the three points.”

The draw in Denmark came after nine straight wins in 2020 for the Scottish champions in all competitions.

McGregor is confident of finishing the tie off in Glasgow next Thursday night.

He said: “The manager touched on that, we have had a great run and we don’t want it to stop now.

“We feel good about ourselves, we feel that we are a good side in Europe, we have that counter-attack threat that we look as if we can always score and probably on a different night we maybe get three or four.

“We have to be confident going into the next game.

“We started the game really well and had a few big chances to maybe go out of sight.

“But that’s the thing with European football, you have to take your chances when you get them. Overall, a 1-1 is probably right.

“We looked comfortable first half, we looked a real threat on the counter attack.

“But it just shows you that when you come off it, you give good teams a chance to play and they can hurt you.

“We were probably a wee bit fortunate at the end of the game but we fancy ourselves going back home.”