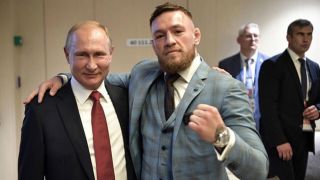 Conor McGregor hailed Russia president Vladimir Putin as "one of the greatest leaders of our time" after the UFC star was a guest at the World Cup final.

McGregor was invited to the Moscow showpiece by Putin as France lifted the trophy for a second time thanks to a 4-2 win over Croatia on Sunday.

And the Irish fighter used Instagram to thank Putin following the conclusion of the tournament in Russia.

"Today I was invited to the World Cup final as a guest of Russian president Vladimir Putin," McGregor wrote after posting a photo alongside Putin.

"This man is one of the greatest leaders of our time and I was honored to attend such a landmark event alongside him.

"Today was an honor for me Mr. Putin. Thank you and congratulations on an amazing World Cup."

Earlier, McGregor – who is reportedly nearing a return to the octagon – wrote: "Enjoying the World Cup final in Russia. A truly amazing spectacle."