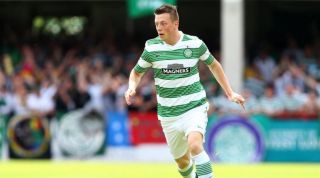 The 21-year-old has forced his way into the first team at the Glasgow club following a loan spell with Notts County last season.

McGregor has made the most of the opportunity given to him by Ronny Deila, scoring four goals and catching the eye with some impressive performances that resulted in him being handed his first Scotland call-up for the Euro 2016 qualifier against Germany next month.

And Glasgow-born McGregor has been rewarded with a new long-term deal at Parkhead in an eventful week in which Celtic were knocked out of the UEFA Champions League by Maribor.

Meanwhile, new signing Mubarak Wakaso has spoken of his determination to "make history" at Celtic following his loan move from Rubin Kazan.

The winger said: "I'm very happy to be here because since I arrived I've met a lot of people and they have been amazing to me and that's why I'm here.

"Celtic's a big team to play at and I have to do my best to see the team through.

"I've not seen much of the Scottish league but the one team I have been watching, Celtic, is enough to judge it. I'm ready to play."