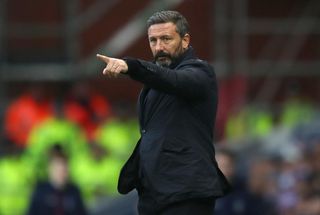 Aberdeen boss Derek McInnes expressed his anger and frustration after his side’s goalless run extended to a fifth straight game in all competitions – and admits the fans are right to boo the goal-shy side.

The Dons have scored just once since the winter break, in a 1-0 win over Dumbarton in the previous round of the William Hill Scottish Cup, and they were held to a 0-0 draw by Kilmarnock in Saturday’s fifth round tie despite having the better of the play.

McInnes said: “The wind made conditions difficult for both sides, at times farcical in the second half, but I’m angry and embarrassed at not scoring for the fifth game in a row. Clearly that’s where we need to get better.

“If you don’t score in five games you deserve stick, and my players need to take more responsibility to answer the critics.

“The team was set up to be as positive as we could today to try to go and score goals., but I understand criticism from the fans.

“We should have had a penalty in the first half for a challenge from Niko Hamalainen on Matty Kennedy, it was inside the box by a good foot, and that’s one of three we should have had in the last five games.

“I thought we actually played well today and if you watched that game in isolation you’d have seen a team very composed and who did so much right in the game – but once again not enough determination to score a goal.”

Kilmarnock manager Alex Dyer was pleased with his side’s performance, saying. “We came here, worked hard and got a result which gives us a chance of making the next round.

“We were missing a couple of players and have wide players who love getting forward so it was ideal to play three at the back.

“The wind was strong but we weathered that. Aberdeen din’t cause us too many problems – we didn’t create a lot, but we were comfortable and it was good a performance.

“It wasn’t pretty but after the run we’d been on we now have three games unbeaten and the boys are happy with where they are.”