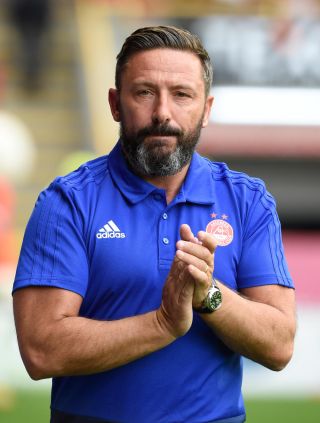 Derek McInnes has cleared the path for Steve Clarke to land the Scotland job after insisting he is only focused on rebuilding his Aberdeen squad.

The Dons boss and his Kilmarnock rival Clarke are understood to be the Scottish Football Association’s top two choices to replace Alex McLeish as national team manager, with Scotland Under-21 coach Scot Gemmill also a contender.

But McInnes has backed Pittodrie chairman Stewart Milne’s claim that his focus, for now, remains on the cut and thrust of club management.

The 47-year-old said: “What I’ve said to the chairman is that I see myself as a club manager for this moment in time, that has not changed.

“I think when you get asked about these things publicly it can come across a bit arrogant. I’ve not been asked to be Scotland manager.

“I would like to be the Scotland manager at some point, I think anybody coaching and managing would have aspirations of managing their country.

“But I see myself with work to do at Aberdeen. I’m a club manager and I’m not ready to give that up.

“I would miss the day-to-day running of a club. It’s not to say (international management) is not for the future but my job here at Aberdeen is where I see myself.”

McInnes’ contract expires at the end of next season and Milne is keen to tie him down for longer.

But the manager is more concerned he has replacements lined up for the likes of Derby-bound skipper Graeme Shinnie and in-demand defender Scott McKenna and on-loan full-back Max Lowe, who is being targetted by Rangers.

“I speak to the chairman two or three times a week and the opportunity to stay here has been brought up,” said McInnes, whose side must beat Hibernian at Easter Road on Sunday and hope Killie trip up against Rangers if they are to snatch third place.

“That’s something we will look at. “I think, for now, we need to get players in.

“I wouldn’t be against sitting down with the chairman and thrashing (a contract) out but right now our focus will be on the rebuilding of the squad.

“We’ve got a big rebuilding job, to get players in in time for pre-season, hopefully, to come back for European football.

“Nothing has changed for us (with Max). I’ve no doubt that clubs will be interested in Max because he’s a good player.

“But he’s Derby’s player, not ours. I speak to Frank and Jody often, I speak to Max’s agent and Max on a daily basis.

“If Derby decide he’s going out on loan he’d love the opportunity to be here. He’s said that often enough and I have no reason to disbelieve him.”