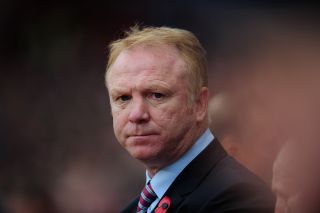 The Scot has previous experience of coaching teams in the Premier League, having had spells with Birmingham and Aston Villa in England's top flight.

Palace have slumped to the bottom of the table having won just once in nine league fixtures this season, and are searching for a new boss after parting ways with Ian Holloway.

And McLeish - who has been out of work since an ill-fated two month spell at Nottingham Forest between December and February - is keen to be considered.

"There hasn't been any contact yet but I am available as a free agent," the 54-year-old told Sky Sports.

"Crystal Palace are in a position that's precarious for them but there's still a lot of points to play for.

"I've had those kind of challenges before and I've had some successes and some failures, but if you've got a fighting spirit and good players playing to their strengths, then why can't Palace stay up?"

McLeish - who guided Rangers to two Scottish league titles in 2003 and 2005 - is also considering the possibility of managing outside the United Kingdom.

He added: "I've watched a lot of games, I've visited friends who coach abroad and have kept my finger on the pulse.

"I'm fresh again. I'd like to have a crack at somewhere, maybe even abroad."