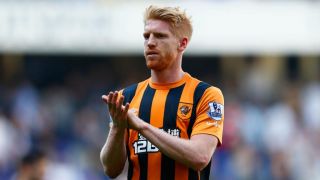 Paul McShane is one of six players who will leave Hull City following the club's relegation from the Premier League.

The 29-year-old initially moved to the KC Stadium on loan in 2008 and went on to make 118 league appearances.

McShane is joined by Liam Rosenior, Yannick Sagbo, Maynor Figueroa, Steve Harper and Joe Dudgeon in departing the club following the expiry of their contracts.

"Regrettably, following relegation we have made the decision to release the majority of those players whose contracts have expired," manager Steve Bruce told the club's official website.

"We would like to place on record our thanks for the service they have given to the club, particularly our two longest-serving players Liam Rosenior and Paul McShane.

"Both players have been outstanding for us and they leave with our very best wishes for their futures.

"The aim now is to retain as many of the remaining squad as possible and look to add some new faces this summer as we bid to compete at the top end of the Championship and bounce straight back into the top flight."