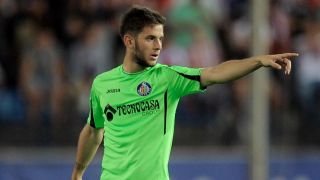 Alvaro Medran has left Real Madrid to join Valencia on a four-year-deal.

Medran signed a contract at Mestalla until June 2020 after failing to break into the Madrid first team.

The midfielder made just five senior appearances for Madrid and spent the previous campaign on loan at Getafe.

He played 20 times for Getafe but could not prevent Madrid's neighbours from relegation as they finished second bottom of La Liga.

Medran becomes Valencia's second signing of the transfer window after they brought in former Manchester United winger Nani on a three-year-deal.