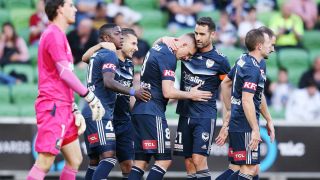 Melbourne Victory moved above local rivals Melbourne City to third in the A-League thanks to a crushing 5-2 win over struggling Central Coast Mariners on Sunday, Besart Berisha leading the way with a hat-trick.

Mariners have only won four times all season and it became clear early on that they were in for another long day, as the impressive Leroy George opened the scoring with an emphatic finish after being fed by Berisha in the 15th minute.

The pair switched roles 10 minutes later - George releasing Berisha through the middle and the Kosovo international applied a cool finish.

Mariners were then dealt the blow of losing Antony Golec just before the break, as the centre-back suffered a potentially serious knee injury after getting his leg trapped under Victory goalkeeper Lawrence Thomas in a collision.

And things got worse early in the second half.

George was involved again as Victory went three ahead in the 54th minute, charging into the penalty area and cutting a pass back to James Troisi, who in turn squared to Berisha to sweep home.

And Berisha completed his hat-trick 16 minutes from time, heading Terry Antonis' cross in at the back post, before Christian Theoharous added Victory's fifth with a rasping volley that found the net with a little help from the post.

Mariners pulled two back through Connor Pain late on - his second being a particularly impressive strike - but it had long been over as a contest.