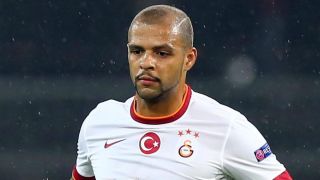 Felipe Melo is delighted to have finally completed a move to Inter, having previously come close to a San Siro switch several years ago.

Melo left Galatasaray on Monday to become one of three deadline-day signings for Roberto Mancini's new-look Inter, along with Adem Ljajic and loanee Alex Telles.

At a press conference to mark his arrival on Thursday, the experienced Brazilian midfielder revealed he could have joined Inter from Fiorentina, his club in the 2008-09 season. Melo went on to represent Juventus, before then moving on to Galatasaray.

"I was close to joining Inter in the past when I was playing for Fiorentina," he said.

"I never had any fear about the move breaking down in the transfer window because no one can close the doors that God opens for you. I was relaxed, waiting to grasp this opportunity. What matters is that I'm here now."

Melo is eager to make an impact at his new club in next weekend's Milan derby.

"I'm still a little behind in terms of fitness but I think I'll be available for Sunday," he added.

"I see myself as a leader on and off the pitch. I don't take offence when people dub me a 'dirty' player. Being aggressive and putting my foot in are features of my play, but I would like to point out that I didn't receive a single red card last season.

"I know where my strengths lie and I know what I have to do on the pitch.

"I'm not fussed about where I play, I just want to perform."