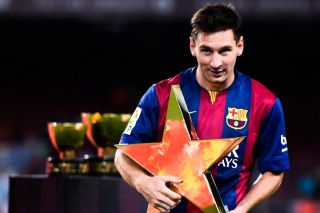 FIFA placed the club under a transfer embargo in April, after irregularities were found in Barca's approach to youth football.

The Catalan giants managed to suspend the punishment by means of an appeal, allowing them to sign the likes of Luis Suarez, Ivan Rakitic, Thomas Vermaelen and Jeremy Mathieu.

Barca's plea was rejected on Wednesday, however, meaning Barca will be unable to conduct any transfer activity until January 2016 - although the club consequently announced their intention to take the case to the Court of Arbitration for Sport.

Barca's youth academy - known as La Masia - has produced a line of world-class talent in recent years, including the likes of Messi, Xavi and Andres Iniesta.

And Messi has spoken of how life in the academy helped him develop as more than a footballer.

"I arrived as a kid and grew up here," he told the club's official website.

"The values of La Masia shaped me as a person. What I learnt at the club made me what I am."

In a press conference on Wednesday, Mascherano echoed the sentiments of his team-mates and spoke of the club's youth policy in glowing terms.

"It is a very delicate situation for me to be giving opinions on because I don't know the issue of the law in any great depth," he said.

"We are dedicated to football and we try to do it in the best way.

"In a personal manner, I can say that the club have worked and taken good care of the guys in La Masia - that is what you can see.

"I know that today many children have passed through the club. One sees that the club have given them the best quality of life here. That is what I can say, the rest is down to legal issues."