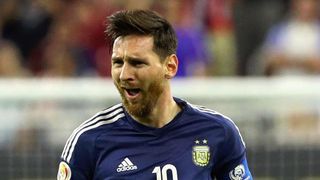 Barcelona star Lionel Messi will appeal against the 21-month jail sentence handed down to him by a Spanish court after being found guilty of fiscal fraud.

The 29-year-old - who received the backing of Barca following the ruling - and his father Jorge were both given the same prison sentences for the offence, with the former Argentina international fined €2million for three counts of tax fraud and his dad penalised €1.7m.

Both men have always denied any wrongdoing, and Messi's representatives have confirmed the five-time Ballon d'Or winner will fight his conviction at the Supreme Court.

The appeal was confirmed in a statement on Wednesday as Messi's camp insisted they had always behaved correctly, as well as expressing their confidence of success in challenging the sanction based on their analysis of similar cases.

Neither Messi nor his father is likely to spend any time in prison as any sentence of less than two years – for non-violent offences – can be served under probation, according to Spanish law.

Messi and his father were accused of defrauding Spanish authorities by failing to pay tax totalling €4.1million on image rights in 2007, 2008 and 2009.

It was claimed they used tax havens in Uruguay and Belize in order to conceal the true amount earned from those lucrative image deals.