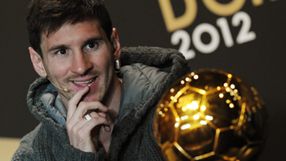 The award, officially known as the FIFA Ballon d'Or, came after the Barcelona player scored a remarkable 91 goals in 2012, a record for a calendar year.

Real Madrid and Portugal forward Cristiano Ronaldo was second, the third time the 2008 winner has finished runner-up, and Barcelona and Spain midfielder Andres Iniesta was third as Spain again missed out.

Despite dominating international football for the last four years, no Spanish player has won the award.

"It's incredible to win a fourth in a row, amazing," said Messi. "I want to share this with my Barcelona team-mates and my Argentina team mates."

Although Messi did not have an outstanding year in terms of Barcelona titles, missing out on the Champions League and La Liga, he enjoyed a resurgence of form with Argentina, scoring 12 goals including his first two international hat-tricks.

Spain's Vicente del Bosque was voted as coach of the year for the first time after his team won Euro 2012, holding off Real Madrid's Jose Mourinho and former Barcelona coach Pep Guardiola.

"I want to remember all the coaches I had in my career who all encourage me to become a coach," he said before appealing to his fellow coaches and players for better behaviour.

"I think everyone in football, we all feel this fascination for the game, we want the same but we want to defend football, to take care of it and behave with the highest ethics and best personal conduct."

Messi was voted FIFA Player of the Year in 2009 before picking up the new-look award in 2010 and 2011 after it was fused with the Ballon d'Or award previously handed out by France Football magazine.

The best goal of the year was given to Slovakian forward Miroslav Stoch for his effort for Fenerbahce against Genclerbirligi in a Turkish Super League match, hooking the ball into the goal from the edge of the penalty area.

Former West Germany captain and coach Franz Beckenbauer was given the presidential award for outstanding service to football.

Abby Wambach became the first American since 2002 to win the Women's Player of the Year award. Swede Pia Sundhage, who led the United States to the gold medal at the Olympic Games, was named coach of the year for women's football.

Uzbekistan won the fair play award for their overall record in Asian competitions.