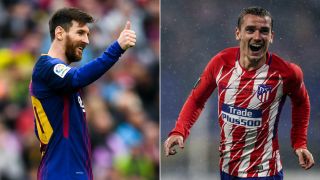 Lionel Messi says signing Antoine Griezmann would be a "brilliant" boost to Barcelona's hopes of winning the Champions League.

The Atletico Madrid ace has long been linked with a big-money move to Camp Nou and has resolved to clarify his club future this week.

Should he make the switch, Griezmann would add further star power to an attack that already includes Messi, Luis Suarez and Ousmane Dembele.

Messi is excited by the prospect of uniting with the 27-year-old and believes he would go a long way to helping Barca become European champions for the first time since 2015.

"I am in agreement that to win the Champions League again we need to have the best players. And Griezmann is one of them," Messi told Sport.

"If the club sign him, brilliant. I don't know if he's the priority. That depends on the signing committee and the coach.

"I can only say that to win the Champions League you have to have the best players. And he is very good."

Barca cruised to a domestic double in their first season under Ernesto Valverde but those achievements were undermined by an ignominious defeat to Roma in the Champions League quarter-finals.

Messi, though, is adamant the season was a success.

"No," he said when asked if he would trade the trophies for a continental triumph. "Winning La Liga and the Copa [del Rey] is really important. It's not easy.

"Despite what happened in the Champions League, the season was really good.

"We had a great year with the double. It's true that the Champions League excited everyone because of what it means to win it, but there's no need to take anything away from what we have done."