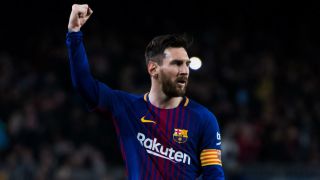 Barcelona superstar Lionel Messi does not expect to play for anyone but the LaLiga champions before calling time on his top-level playing career.

The 30-year-old was in typically sublime form this season as Barca marched to their latest domestic double and he will now lead Argentina's bid for World Cup glory in Russia.

Amid preparations for the tournament, Messi spoke to the Pasion por el Futbol programme and, having signed a contract through until 2021 earlier this season, offered further assurances over his Camp Nou future.

"Every time I have it more clear that, in Europe, Barcelona is going to be my only place," Messi said.

Sporadic links to Manchester City have for some time seemed unlikely to come to fruition but Messi has previously spoken of finishing his career with Newell's Old Boys in his native Rosario.

Nevertheless, he sees no guarantees of such a swansong coming to pass.

"I always said that I want to play some day in Argentine football," he added. "I do not know if it will happen but I have it in mind. Nothing more.

"I'd like to live that for at least six months but you never know what's going to happen."