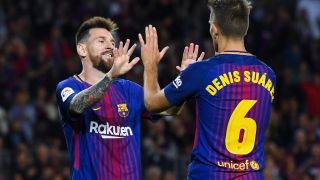 Messi netted three times in the second half after opening the scoring in the first as Barca cruised to a 6-1 LaLiga victory at Camp Nou on Tuesday.

The Argentina international already has nine league goals this season, six more than the next best.

"He is the most intelligent player that I have ever seen on a football pitch," he told a news conference.

"You don't know how, but he just appears. He's extraordinary. There are no words."

Paulinho and Denis Suarez were also on the scoresheet in Barca's comfortable win, which was their sixth straight in all competitions.

But despite the one-sided scoreline, Valverde said Eibar – who are 13th in the table – were better than the thrashing suggested.

"Eibar are a brave team," he said.

"If you look at the score after the game, it seems we've won easily but that wasn't the case.

"They often put us in a tight spot."