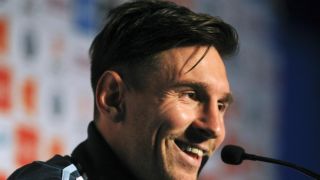 Lionel Messi arrived in La Serena to link up with the Argentina squad and claimed he is ready to atone for their World Cup shortcomings.

Messi, fresh off sealing a treble with Barcelona in the UEFA Champions League final on Saturday, landed in Chile to launch Argentina's bid to add to their 14 Copa America titles.

Argentina's Group B campaign begins against Paraguay on Saturday.

"It would be awesome to win the Copa America," Messi told a news conference.

"This is a generation that is willing to win something with the national team. We are in a good momentum, and individually we have great players."

Messi's men reached the World Cup final in Brazil, only to lose 1-0 to Germany after extra-time, which will see their drought in the FIFA showpiece extend to at least 32 years come the 2018 edition.

"The wound of what happened last year, we will carry it always," the Barca attacker said.

"But the Copa America is very important for Argentina, and for us.

"We haven't lifted a trophy for many years.

"We want the cup more than anybody."

Messi said he had a personal score to settle at international level too.

"At this Copa America, I can get better than the World Cup," said the 27-year-old, who won the Golden Ball as the 2014 World Cup's best player.

Asked his thoughts on Argentina's greatest threats in Chile, Messi responded: "Chile is local, Colombia is spectacular and Brazil will also be difficult players.

"It is the most hard-fought cup in recent times."

Argentina trained in the alpine resort of Juan Soldado in La Serena on Tuesday, with goalkeeper Sergio Romero (left shoulder) training away from the main group as Gerardo Martino cast his eye over the squad.

With Romero battling to be fit for the Paraguay fixture, back-up custodians Nahuel Guzman and Mariano Andujar were put through their paces by goalkeeping coach Gustavo Pinero.