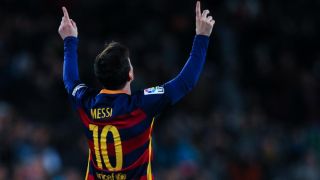 Barcelona superstar Lionel Messi insists he wants to remain with the Catalan giants for the rest of his career.

Messi, who has been with Barcelona since the age of 13, claimed a record fifth Ballon d'Or crown on Monday.

The 28-year-old won a total of five trophies with the club in 2015 and guided Argentina to the final of the Copa America, suffering a penalty shoot-out loss to hosts Chile.

And despite stating in 2013 he wanted to return to boyhood club Newell's Old Boys before he retires, it appears Messi has changed his plans.

"I have said it a thousand and one times, it is the same response as always," he told reporters.

"My idea is to finish at home, and my home is Barcelona. I hope it can be like this."

Messi's contract at Barcelona ends in 2018, when the Argentinian will be 31 years old.