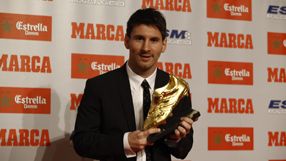 The 25-year-old, who took his career tally for club and country to 301 goals on Saturday, was among the 23 players named in the list which includes Real Madrid and Portuguese forward Cristiano Ronaldo, runner-up to Messi in last year's vote.

Andres Iniesta of Barcelona, named the Player of the Tournament after Spain retained their title at Euro 2012 is also included as is Radamel Falcao, who has been in brilliant scoring form all year for Colombia and Atletico Madrid, helping his club win the Europa League last season.

"I don't think we'll see a player like him again. Not only for the goals he scores but for the ability he has to read the game," he said before hailing Iniesta.

"He is the clear example of a player trained at the Masia [Barcelona youth academy] who reaches the top. He is another one of those players of a quality that Barca will find it tough to produce again."

Ten men are also named on the shortlist for Coach of the Year Award including Vicente del Bosque, who led Spain to the Euro 2012 title in Ukraine and Poland in July.

Roberto Di Matteo, who took over at Chelsea two months before they won the Champions League in May, is also on the list but there is no place for Frenchman Herve Renard who led Zambia to an unlikely victory in the Africa Cup of Nations in February.

The shortlists will be whittled down to a final selection of three at the end of November with the winners announced at a globally televised gala ceremony in Zurich on January 7 next year.