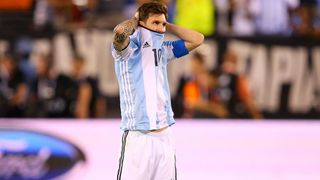 Lionel Messi is not a good leader and Brazil star Neymar is a better player, according to former Argentina fitness coach Carlos Dibos.

Argentina are facing a tough battle to qualify for the 2018 World Cup, with their 2-0 defeat to Bolivia in La Paz leaving them in fifth place in the South American qualifying section with four matches left.

Messi was banned for their latest loss after he was hit with a punishment by FIFA for swearing towards an official and, unless an appeal against his suspension is successful, the Barcelona star will not return until the final qualifier against Ecuador in October.

Dibos has questioned Messi's ability to inspire the team as Diego Maradona once did and said the captain can no longer be considered the best player in the world.

He told TyC Sports: "I do not think it's wrong for a player to have a dialogue with the coach as to who he prefers or would chose to have next to him, but that player has to have personality, courage, bravery, to be able to carry the team on his shoulders... that was Diego Armando Maradona.

"That player has to feel that the shirt represents a huge number of Argentines and that we all want the best. Diego represented that and, for me, Leo does not.

"It doesn't mean that he is bad. For me, he's among the three best players in the world, but he's not the best. Today, Neymar is better."

Dibos, who worked as a physical preparation coach for Argentina between 2006 and 2008, alleged last year that Messi held too much sway in how players and coaches were selected for the national team.

"Now the truth is out, we're sick [of his behaviour] in Argentina. We're going to make that very clear," Dibos, the brother-in-law of Atletico Madrid boss Diego Simeone, said to Radio La Red.