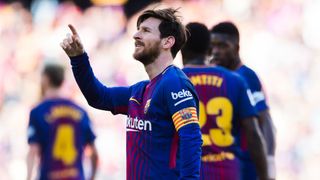 Lionel Messi is the inspiration behind Barcelona's charge towards a possible treble of LaLiga, Champions League and Copa del Rey titles, according to Paco Alcacer.

The duo were on target as Barca cruised to a routine 2-0 win over Athletic Bilbao at Camp Nou on Sunday, Ernesto Valverde's men moving a step closer to regaining domestic glory from Real Madrid.

Alcacer converted Jordi Alba's cutback in the eighth minute and Messi fired home from the edge of the box on the half-hour as Barca followed up their midweek progression to the Champions League last eight by extending their unbeaten league run to 36 games.

Having netted his first LaLiga goal since November, Alcacer was asked if he thought Messi was in the best form of his career.

"He shows that every single day, in training and in matches he scores more and more goals and that's what puts this team where we are right now," Alcacer said.

"My job is to help the team, I've always said that. I'm a team player, I work for them and if I add a goal then great.

"We knew how Athletic defend, we know their style, but getting two up in the first half allowed us to relax a bit in the second half and it's a good three points.

"Our mentality is the same every time we go out - go and win. We leave the table completely to one side and treat every game on its own and go out and win it."

Athletic offered meek resistance in the first period and could have been out of sight had the woodwork not saved them on three occasions and defender Unai Nunez - who also lavished praise on Messi - was encouraged by an improved showing after the interval.

"He [Messi] is undoubtedly the best player in the world and he shows it every single game," Nunez said.

"In the first half they were fantastic and showed why they're league leaders. They were significantly superior in the first half but at half-time we talked about it and we had to turn the game around, there was no option whatsoever. We haven't scored but we never gave up.

"There were things to correct, we had to press them higher, we didn't want them left to run free and we had to correct that.

"We had a close look at ourselves and our attitude and how we came to perform. We had to show with this performance what we're made of between now and the end of the season, our season isn't finished yet."