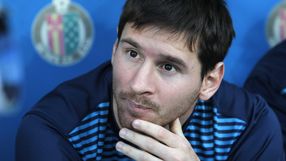 The 25-year-old Barcelona forward has won three consecutive World Player of the Year awards, and is expected to be in the running for a fourth this year, after scoring an unprecedented 73 goals in all competitions last season.

"I prefer to win titles with the team ahead of individual awards or scoring more goals than anyone else," Messi told Spanish daily EL Pais.

"I am more worried about being a good person than being the best football player in the world. When all this is over, what are you left with?

"When I retire, I hope I am remembered for being a decent guy. I like to score goals but I also like to have friends among the people I have played with."

Messi is expecting the birth of his first child, a boy to be named Thiago, in the next month, but does not seem to have been distracted on the pitch.

He has netted 10 goals in all competitions so far, under Pep Guardiola's former assistant Tito Vilanova.

The relatively unknown Vilanova appears to have settled in to his new role quickly and the side top La Liga after a perfect six wins from six.

Vilanova has been helped by a prior knowledge of many of the players, including Messi, from his time spent working in the famed Barca youth academy 'La Masia'.

"I was pleased with the news that Tito was the replacement for Pep," Messi added. "I have known him since I was a lad.

"Tito was the first person who had faith in me, because at the time I was a substitute or didn't play, and he was the one who made me starter in that category [Under-16s].

"I know him well, he's open. He tells you things to your face without any type of problem, I like this."

Barcelona resume their great rivalry with champions Real Madrid on Sunday, when Jose Mourinho's team visit the Nou Camp in La Liga having already overcome the Catalans in the Spanish Super Cup back in August.

"It's the best feeling to beat Madrid because of the importance attached to it," Messi said of the 'Clasico' as he went on to detail the strengths of their eternal rivals.

"Madrid kill you on the counter-attack," he said. "They have extremely fast forwards, and the link-up between the defence and the attack lasts only five seconds and it is a goal. They don't need to play well to score three against you.

"I am lucky enough to know well [fellow Argentines] Gonzalo Higuain and Angel di Maria. Higuain isn't in the game, touches the ball twice, and scores two goals. Madrid score goals out of nothing."