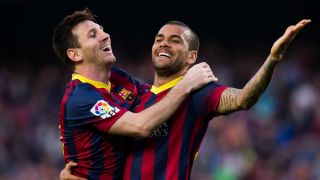 Lionel Messi's reliability has been a key factor in Barcelona's incredible successes during his time at the club, feels former team-mate Dani Alves.

Under Pep Guardiola, Barca's tiki-taka style meant they were hailed among the greatest football teams of all time, with Messi the catalyst that pushed the Catalan giants to fresh heights.

The world-class quality of the five-time Ballon d'Or winner has never been in doubt, but Alves says it is Messi's ability to deliver on a regular basis that makes him so vital to Barca.

"Messi's impact in that team was execution and reliability," Alves told Omnisport at the launch of new Barcelona film 'Take the Ball, Pass the Ball'.

"We knew it. If we gave him the ball correctly, he'd help us to make the difference, to win titles. He was reliable. He's not just a big name in a team: 'Oh, you have a big name in your team.' You have to know if he's reliable or not.

"Because you have many big names in football. But big names who you can trust, you have less of them. We had that big name who we could trust."

Alves and Messi had a near telepathic relationship on the pitch, similar to the one enjoyed between the Barca captain and left-back Jordi Alba in their current side.

But Alves - now at Paris Saint-Germain after a short stint with Juventus - explained they had to work on developing their understanding on top of their natural connection.

"My story with Messi is very strange. Immediately, without knowing each other, we connected," Alves added.

"I was telling my friends and my team-mates: 'This year, we have to enjoy it, we have this youngster who's amazing.'

"We worked on that bond. We were getting along better and better. We understood how the other was playing, when and how to play... And step by step, we got to know each other much better than we hoped. We played instinctively.

"Without looking, we knew where the other was. There's only time and intelligence to reach such a point."

Take The Ball, Pass The Ball is out now on OurScreen Cinemas, and on DVD & Digital Download from 12 November.