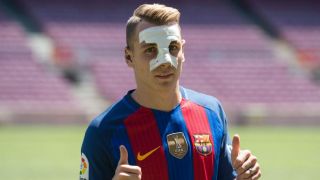 Luis Enrique's squad has been bolstered by the arrival of midfielder Denis Suarez from Villarreal and French defensive duo Samuel Umtiti and Lucas Digne.

Barca stated they would have a transfer budget of €60million to operate with before pursuing a third consecutive Spanish title and their buys to date, along with the sale of Marc Bartra to Borussia Dortmund leaves an estimated €24.4m outstanding.

"You have to talk to [technical secretary] Robert [Fernandez] and [sporting director] Albert Soler and it depends on the remaining money but I am optimistic," Mestre told Mundo Deportivo.

"Until August 31 there is time to move pieces, both for incomings and outgoings. It is still early.

"Denis, Umtiti and Digne show that the work is done throughout the year and materialises to be finished. There are others [which] are not as fast. The work is brewing throughout the season."

Mestre believes Barcelona could still seek attacking reinforcements as they prepare to begin the campaign with Neymar on international duty as part of Brazil's 2016 Olympics squad.

He claimed there was a "technical issue" that made Barca cease their pursuit of Nolito before the Spain forward left Celta Vigo to join Manchester City, while he does not intend to bring in any more defenders if Thomas Vermaelen leaves the club.

"He is central left, we also have [Jeremy] Mathieu and Umtiti there," Mestre explained. "And with other the central defenders, [Gerard] Pique and [Javier] Mascherano, we have both sides covered.

"[Right-back] I think is well covered. Aleix Vidal had to adapt in his first year. It is normal."

Mestre added that goalkeepers Claudio Bravo and Marc Andre ter Stegen – both of whom have been linked to Manchester City – were not imminently on the move.

"For a transaction to be made, there must be the interest of the two clubs and the player but so far no one gets out of here," he said.