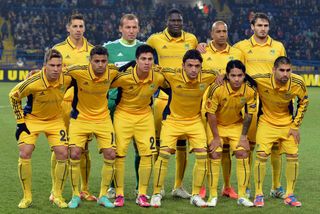 This action related to supposed breaches of articles 2.04g, 2.05 and 2.10 of the Regulations of the UEFA Champions League, which are linked to match fixing.

And it was announced on Wednesday that the club had been handed a one-season ban from Europe's premier club competition, subject to appeal.

Article 2.04g states that in order for clubs to take part in UEFA competitions they must confirm in writing that they have not "directly and/or indirectly (been) involved (in), since the entry into force of Article 50(3) of the UEFA Statutes, i.e. 27 April 2007, in any activity aimed at arranging or influencing the outcome of a match at national or international level".

Having assessed the statements and documents supplied by Kharkiv, as well as documents submitter by the UEFA Disciplinary Inspector, it was decided they had not met these stipulations.

Kharkiv will now decide whether or not to appeal their punishment through the Court of Arbitration for Sport.

They qualified for the play-off round of this season's Champions League with a victory over PAOK in the third round of qualifying and were due to play Bundesliga side Schalke for a place in the group stages.

However, UEFA's Emergency Panel will now meet on Wednesday to decide the outcome of that tie.