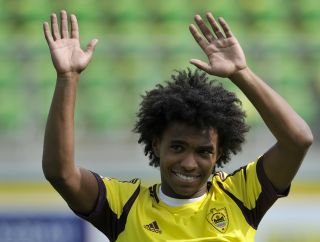 Andre Villas-Boas' side are reported to be favourites to sign the Brazilian forward from the Russian club.

Meulensteen, who managed Willian during his brief period in charge there, believes that the 25-year-old would be a great addition to Tottenham's squad.

"If it's Spurs that's going to get him they'll get an excellent player," he told Sky Sports News.

"He's very versatile, he can play in different positions, he's a very creative player and an excellent professional with a very good personality.

"He's going to be a major trump card for Spurs if they can get the deal to go through.

"He can beat a player, he can score a goal. I thought he was an absolute delight to work with."

Villas-Boas has already lured the likes of Paulinho, Nacer Chadli, Etienne Capoue and Roberto Soldado to White Hart Lane for the new campaign.

But speculation continues to surround the future of last season's star man, Gareth Bale, who has been heavily linked with a big-money move to Real Madrid.