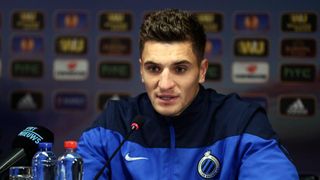 Club Brugge defender Thomas Meunier has made it clear that a transfer to Paris Saint-Germain is by no means a done deal due to fears he might not get regular first-team action at the Parc des Princes.

The right-back temporarily left the Belgium camp ahead of Friday's surprise 3-1 Euro 2016 quarter-final defeat to Wales to hold talks with the Ligue 1 champions.

However, Meunier is set to take more time to ponder his domestic future.

"I have not made a final decision yet. PSG have an interesting project, with a lot of financial resources and Champions League football. But I am still having a lot of doubts," the 24-year-old told reporters.

"PSG are developing into a club of the highest level, like Barcelona, Real Madrid and Manchester City. How much playing time would I get there? Will I get a chance to prove myself or will I be warming the bench all season?

"I know that the coach is keen to sign me, but they obviously still have Serge Aurier as well.

"I might get more playing time elsewhere. There are seven clubs that have shown a concrete interest in signing me. Some coaches have guaranteed me first-team football.

"We will see what happens. I'd say there is a 30 per cent chance I will join PSG, but there are still a number of candidates."

Meunier has reportedly also caught the attention of the likes of Napoli and West Ham.