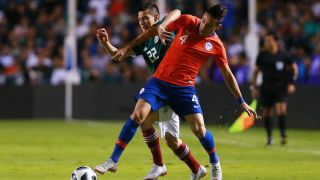 Alexis Sanchez made his Chile return as his nation overcame Mexico 1-0 in a friendly on Tuesday.

In his first appearance for Chile since March, Sanchez enjoyed some good moments in Santiago de Queretaro.

But while he was unable to provide the goals coach Reinaldo Rueda wanted, he helped set up Nicolas Castillo's 89th-minute winner for Chile.

Mexico made a bright start before Chile almost took the lead after a quarter of an hour, Mauricio Isla firing wide from inside the area after an Arturo Vidal pass.

The opening half-hour was largely open, and the hosts went close through Marco Fabian, whose low side-footed strike was pushed away by Brayan Cortes in the 19th minute.

Both teams lacked a final pass, with Sanchez twice wasting decent opportunities to provide for Chile.

However, Sanchez created a great chance for the visitors seven minutes before half-time, the Manchester United attacker setting up Junior Fernandes, who was denied by a brilliant low save by Gonzalez.

It was Mexico who started the second half well, and Raul Jimenez put a header over the bar in the 49th minute.

Gonzalez kept the hosts level midway through the second half, diving to his left to push away an Angelo Sagal header after Sanchez had released Eugenio Mena to cross.

Paulo Diaz had an effort ruled out for offside with 14 minutes remaining, but Chile found a winner.

Sanchez's well-weighted touch set up Castillo, whose 20-yard strike was parried by Gonzalez, the striker getting to the rebound quickest to tuck away the winner.

What does it mean: Chile still struggling in attack

Sanchez's return provided Rueda's side with a spark, but they still reached no great heights in attack. Chile have now scored just eight goals in eight games since the start of the year.

Already under fire for his club performances this season, Sanchez was good in different patches against Mexico. While his final pass was lacking at times, he also set up one of Chile's best chances for Fernandes before having a hand in the winner.

Rueda took charge of Chile in January, but the win was just his third from eight games in charge. Castillo's late winner was a much-needed one for Rueda as Chile look for form and confidence with the Copa America just eight months away.

Mexico will face Argentina in two friendlies next month, while Chile take on Costa Rica and Honduras.