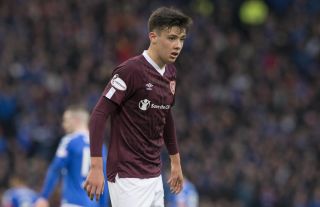 Hearts full-backs Michael Smith and Aaron Hickey have been given little chance of recovering from injury in time to face Rangers on Sunday.

But Sean Clare returns from suspension for the Ladbrokes Premiership bottom club.

Peter Haring remains sidelined with pelvic trouble and both Jamie Brandon and Callumn Morrison are still out.

Alfredo Morelos serves the final game of his three-game ban for Rangers.

Skipper James Tavernier is also unavailable to face Hearts after an appendix operation. Greg Stewart is ruled out with a calf strain but could be back to face Ross County next week.

Filip Helander has been able to dispense with his crutches but Steven Gerrard is not expecting to see the Swede back from his foot injury any time soon.