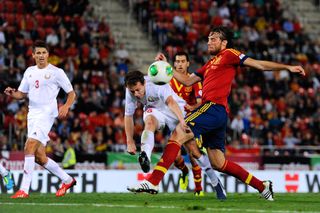 The Swansea City striker started the FIFA World Cup qualifier in Mallorca, before being replaced by Manchester City's Alvaro Negredo just short of the hour mark in the 2-1 win.

The narrow victory meant that Del Bosque's men are all but assured of a place at next year's finals in Brazil, needing just a point from Tuesday's clash against Georgia to guarantee qualification.

And Michu has revealed his gratitude to the Spain coach for his chance to shine.

"I am very pleased and very grateful," the 27-year-old said.

"I appreciate the confidence that the coach has given me."

Negredo, who scored Spain's second on Friday, said he was eager to force his way back into the side but insisted that there was no ill feeling between the forwards.

"I'm very happy, trying to make the most of the chances I get but the most important thing is winning," he said.

"We all want to play, we have that excitement. Today he (Del Bosque) went for Michu, another day he goes with me."